Here’s some of the main environmental issues Venice is facing & some brief explanations on how the city is currently dealing with them.

The lagoon is an almost closed body of water, with only three narrow openings towards the Adriatic Sea. Sewage and other kinds of pollution used to be a major problem in the lagoon. It is still a problem, but things have improved immensely in the last decades.

Venice suffers of traffic congestion like so many other cities, only in Venice the congestion is made up of a mix of modern and traditional ships and boats. There’s a kind of boat in Venice for each type of vehicles we’re used to seeing on the roads elsewhere, from bicycles to heavy trucks.

Garbage is a problem in Venice like it is in every other major city, only in Venice it is so much harder collecting it. It is rather difficult to sweep a canal. As a result, there are often garbage in the canals, but don’t complain, pick it up. After all, that’s why kayaks in Venice has bungee cords on the deck.

Moto ondoso means wave movement, and it is one of the largest and growing environmentals problem in Venice and in the lagoon. In a shallow basin like the lagoon natural waves are few and small, but modern motorised water crafts create waves of a size, depth and frequency that is highly detrimental to the city and the lagoon.

In Venice there’s a canal where other cities would have a road, and there’s a boat where in other cities there would be a wheeled vehicle. Yet, Venice does not have less traffic than any other modern city of sixty thousand inhabitants.

This makes for a lot of boats.

There are as many different kinds of boats in Venice as there are different kinds of vehicles on land. There are the small private boats, taxis, ambulances, barges for trasportation of goods, busses (vaporetti), car ferries and the occasional cruise ships. Add, on top of all this, the gondolas and sandoli used for the tourists, and every once in a while, a group of kayaks.

The traffic is worst in the Canale Giudecca, Bacino San Marco, Canal Grande, Canale Cannaregio, Canale Novo/Rio Foscari, and the outside canal along the northern side of the city. Those are the places where most motorised traffic is allowed.

In the inner canals of the city motorised traffic is banned, except for specially authorised boats, which include taxis, residents, transportation of goods, garbage collection and police and ambulances. This means that there are very few places where you don’t have to be attentive of motorised traffic. 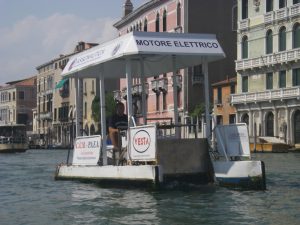 When paddling around Venice we will often find garbage in the canals, sometimes in the water, sometimes left by the tide on stairs and streets along the canals.

This garbage is not necessarily a sign that the people of Venice or the tourists visiting the city are ignorant of the environment. Most of the garbage has been disposed of correctly, but then dispersed by wind, tide and birds.

Garbage collecting in Venice is, like everything else, done by boat. The municipal garbage collecting agency is called VESTA, and their barges are all green. The barges cannot arrive in front of each house, however, and in the older parts of the city there are no spaces for garbage containers near the canals. 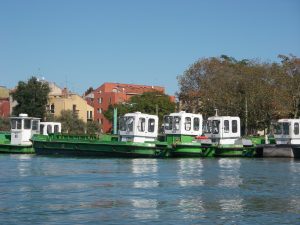 The residents of Venice therefore place the plastic bags with their domestic garbage on their doorstep in the evening, and the garbage collectors then pass in the night with hand drawn carts to collect it and bring it to the barges on the nearest canal.

Unfortunately, the sea gulls have figure this out, and if the calle is quiet enough, they will often tear the plastic bags to shreds before the garbage collectors comes by, leaving the garbage strewn all over the calle. Add a bit of wind or rain, and the garbage will find its way into the water.

This is something the Venetians have lived with for generations, and it is in itself not a huge problem with normal household garbage, had it not been for all the plastic and metal we use in modern packaging of food. 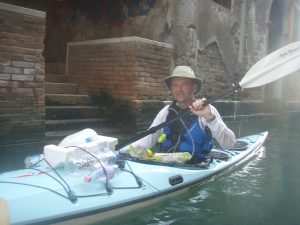 Plastic takes decades to decompose, and will float around in the canals until the tide carries it into the lagoon.

When we paddle around the city, we often collect plastic bottles from the water to clean up the city a little bit. VESTA does have some special canal sweepers but they are seldom in working order and even more rarely seen on the canals.